With the evolution of society and the gradual decline of the modern economy there is one answer for many new homeowners who want to build their dream homes, lightweight construction. It is extremely difficult to identify the skeletal structure of a building from the exterior cases these days. In the last two decades almost every contractor has been using these kinds of materials because they’re affordable, prefabricated, and they can turn a higher profit on a job. Engineered lumber is great for what it’s designed for, structurally sound and considerably cheaper than natural lumber. However, the downfall is its fire restiveness and how it fails significantly quicker than natural lumber. Engineered lumber makes encompasses components including, oriented strand board (OSB), I-joists, laminated veneer, cross-laminated timber, and many more. If there is glue or wax involved and the materials look compressed there’s a good chance its engineered. 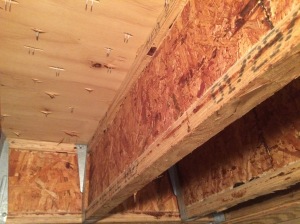 In the fire service this is a constant variable that can change fire and rescue operations in a split second. There have been many reports that have show the lack of fire restiveness within these types of materials. The Structure Board Association’s bulletin on OSB Fire Performance stated that 5/8” OSB flooring is rated for one hour of burning prior to failing. These tests in controlled environments do not match up to real life scenarios. Often times (as pictured) these OSB components are left exposed and may even have holes drilled through them for wires and pipes to be installed. This will create areas for fire to travel and spread even quicker. Another substantial factor is the fire load in any given area. The I-joists will fail quicker above a basement that is packed with more combustibles products.

The Underwriters Laborites (UL) report, Modeling the Thermal and Structural Behavior of Wood Beams in a Fire Environment by M. Tabaddor PhD, showed that the OSB I-joist is made up of three parts. The beam has a top, bottom, and the main board in between that is all put together with pressure, waxes, and glues. The study showed that when the board component reached its maximum thermal tolerance it would begin to fail. However, the rest of the structural flooring components (including the sub flood, rim board and support plates) where still structurally sound and still with their respective thermal limits.

Engineered lumber has minimal mass compared to natural lumber. Fire resistivity is a function of mass, the more mass the longer it can burn, the less mass the less it can burn, and quicker it will fail. So before you pull up to that structure fire think about how and what is going on behind the walls. If you don’t know the type of construction beneath it all, the safest plan could be to think about the worst possible scenario. Approach the incident with that game plan to ensure everybody goes home.